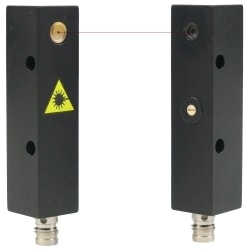 Diffuse-reﬂective sensors detect the light reﬂected by a target. The sensing range of these sensors largely depends on the reﬂectivity of the target. Diffuse mode sensors with ﬁxed or adjustable background suppression are capable of detecting dark objects in front of a light background.

Retro-reﬂective sensors detect the light reﬂected by a reﬂector. The sensor reacts to the interruption
of this light beam by the target. The reﬂectivity factor of the target is subordinate.